Showing posts from May, 2015
Show All

One Flew Over the Cuckoo’s Nest (book) 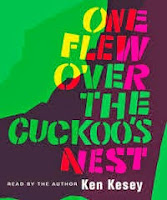 One Flew Over the Cuckoo’s Nest (Written by Ken Kesey)/1962 This is an amazing book. I didn’t read this until I hit thirty; the reason for this being I thought less of it due to having seen the film. The film is not bad, but for me One Flew Over the Cuckoo’s nest was its film version, full stop. I eventually decided to read the book after learning about the interesting life its author Ken Kesey lived, including that he wrote much of this book while working  at a mental hospital. One Flew Over the Cuckoo’s Nest deals with the relationship between freedom and power, and about how mental illness develops when the power of others dominates an individual to such a great extent that he/she can no longer act free. The individuals in the hospital are shown by Kesey to be lacking in courage and self-belief,  and demonstrate an unwillingness to act without permission and approval. While the hospital should be making patients better it actually makes them worse by actively discouraging at
Read more

Once Upon a Time in Anatolia (film)

Once Upon a Time in Anatolia (Directed by Nuri Bilge Ceylan)/2011 Once Upon a Time in Anatolia is an incredibly soothing movie. It is a gentle, lush journey through Anatolia, in which the everyday events of life are made beautiful. The beauty does not arise due to the addition of anything new, but through the illumination of what we often overlook. It is interesting that the movie’s director Nuri Ceylan chose to focus the story on detectives chasing down a body in the Turkish countryside when the feeling of the movie is so tranquil.   My view is that he wanted to point out the beauty that hides behind the curtains of our day-to-day existence, regardless of what those experiences are. This argument is supported by the focus on idle chitchat through out the story, when the actual events taking place are far from the normal human experience. Fundamental to this movie is sound. The director speaks to the viewer with the subtle noises that flow through this movie. Sound is also som
Read more

Dark City (Directed by Alex Proyas)/1998 Dark City is an interesting reflection on the future of humanity or rather future humanity. Spoiler Alert: The story entails a future species that are super intelligent to the point where they have little dependence on physical existence.   They can alter the physical realm by thought or will alone.   However their civilization is in decline and they think that the human ability to live as a separate individual is secret to their survival. The future beings look very similar to humans but they are sexless and hairless. They seem very evil and vampire-ish and they are disgusted by the crudeness of humanity.   They turn Earth into a giant experiment space and enslave the current humanity in a time warp of constant darkness where they put everyone to sleep each day at midnight and change around people’s memories. The result is that we’re living a different life everyday thinking that we’ve lived a certain life all along.   While ther
Read more

Yojimbo (Directed by Akira Kurosawa)/1961 Near the end of Tokugawa Shogunate era, the samurai (or ronin, which were samurai without masters) are losing their status.  Guns are starting to be introduced into Japan and the virtues and skills held by samurai are rapidly losing relevance. Yojimbo covers events that unfold as one of these mysterious no-name ronin arrive at a village controlled by two rival gangs.  Yojimbo means “body guard” and both the gangs try to recruit this ronin to be their yojimbo.  The ronin uses his wit and swordmanship to bring peace to the village.  This is a typical black and white (literally and metaphorically), good versus evil story. One of the great things about these kinds of action flicks is that it is a good indicator of society’s shared notions around aesthetics and characteristics associated with "good" and "evil".   Fictions often associate evil with ugliness and good with beauty.  While the simplistic formula itself in the
Read more

Saint Exupéry: A Biography (Written by Stacy Schiff)/1994 This biography spans across one very, very adventurous man’s life.   If it was someone that had led a relatively quite life it would probably be much easier to write their biography.   But not for Saint-Exupéry or Saint-ex as he was more affectionately known.   The biography combs through his personal journal, journals of his friends and lovers, letters, news items and official reports to create a bible that enshrines the magical nature of this man. My prior knowledge of Saint-ex was “the guy that wrote Little Prince”.   After having read the biography, I think he is more adequately described as an adventurer.   Saint Exupéry is probably one of the lesser-known adventurers of 20 th century.   He was someone that thrived in discomfort, foreign and dangerous situations and he sought it for what it was rather than for fame and glory or a desire to “conquer”. He was born into a declining aristocrat family in 1900.
Read more

Cobain: Montage of Heck (Directed by Brett Morgan)/2015 Wow, Kurt Cobain was an incredibly tortured individual. He had two suicide attempts before a final successful one; he suffered chronic stomach pains leading to a decade-long heroin addiction; and, he had a deep sense of alienation and anger towards just about everything. Watching this documentary made me marvel at how such angry, depressing and anti-establishment music could have been the most popular and iconic of the early 1990s.   Nirvana’s second studio album Nevermind sold 30 million copies.   It is hard to imagine such frustrated and despairing music topping today's charts; yes, maybe getting some mid-range success, but not being the defining music of our age.  The documentary itself is very well put together. I particularly enjoyed the animated scenes that were voiced over by Cobain’s diary entries or interviews. These scenes are blended with interviews of his family, and real footage of Nirvana playing and b
Read more 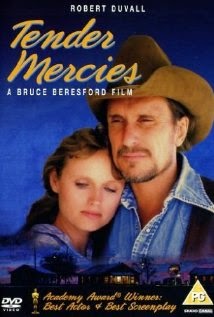 Tender Mercies (Directed by Bruce Beresford)/1983 We see a couple of shadows moving in the glow of yellow light.  The light is coming out of a small motel room next to a rickety country house in a middle of nowhere.  The voices of the shadows sound like two old men fighting over a bottle.  The next morning we see Mac, lying on a bed by himself.  His friend has left him and he has no money to pay for the room.  He offers to work for a few hours.  The few hours turn into a more permanent arrangement. Mac is a recovering alcoholic country singer that is trying to turn a new leaf. We learn by inference that he turns into a scoundrel when he drinks; he has been violent towards his ex-wife, leaving scarred memories for her and his daughter. He settles down with Rosa and her son, and helps them look after the motel.  He stops drinking and gets baptised.  However gradually his past comes back to haunt him: be it his musical fame or his embittered daughter. The film moves along gently
Read more

The Forerunner, The Madman, The Prophet (books)

The Forerunner, The Madman, The Prophet (Written by Kahlil Gibran)/1918 – 1923 I have been immersed in the beautiful words and wisdom of Kahlil Gibran for a few weeks now.  Kahlil Gibran was a Lebanese painter and a poet who migrated to New York in 1895.  He started his career as a painter but had more successes as a poet and wrote many works in the early 1900s. He wrote in a delicate and subtle prose where each sentence needs to be savoured in order to garner their full meaning.  He takes the readers into an ancient and mystical world; the land of kings and slaves where valleys whisper and animals talk.  The gentleness of the wisdom that is delivered was so gratifying when I finally understood (if I understood!) and I was humbled by how ideas that can become convoluted in discussion could be presented so simply. It made me compare them with the self-help books of today’s world.  For those of you who are fans of self-help books, I ask you not to take the following paragraph
Read more 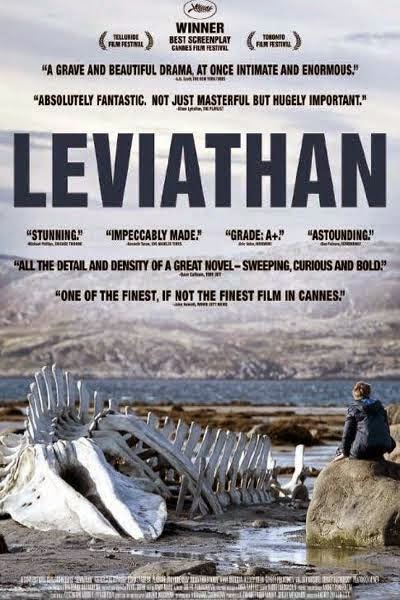 Leviathan (Directed by Andrey Zvyagintsev)/2014 The Russia we see in Leviathan is unrelentingly corrupt.  It encompasses domineering and crippling political forces that are as entrenched and as overwhelming as the natural setting that opens and closes this film.  Zvyagintsev sets mood like not many other directors going around. The lighting is dim and the still shots of nature pull one into a feeling that remains throughout the rest of the movie: a feeling of helplessness in the face of powers that structure and determine the course of one’s life. Leviathan follows the struggles of Kolya.  Kolya has lived in a modest coastal house for much of his life; it is a house built by his grandfather and handed down through the generations of his family.  The local politician is trying to take the land off him so he can use it to secure votes in some manner that is not fully clear until the end of the movie.  Koyla is a fighter that is not willing to bow down to the authorities.  He is stu
Read more
More posts