Showing posts from January, 2018
Show All

The Death of Louis XIV (film) 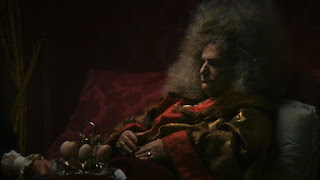 The climax of the film perhaps starts and ends with the title. The grandiose phrase announcing the king’s death. The viewers are then carried gently down the two hours of exquisitely produced ‘slow death’ river. It is not merely the death of a king, but of rational thought and purpose. We see a failed state, drowning in its champagne induced vomit, unable to take action. We see the sycophantic servants pandering to his Majesty’s every need, while undertaking warfare of ego and pettiness among themselves. But this is just a manifestation of the systematic decay that had set in and been seething for a long time, getting more absurd each day. The level of corruption so great and the suffering of people so horrific it mobilized the citizens to take action just a generation later. In our lives, we see the EU and the UN growing morbidly obese in their spirits, its members squabbling over career opportunities and political grandstanding. We see politicians, instead of bringing p
Read more
More posts