Showing posts from August, 2015
Show All

Somewhere (Directed by Sofia Coppola)/2010 Arthur Schopenhauer said that the essence of a human being is a consciousness separate from the rest of existence, and because of this separation, suffering and boredom are inherent to human existence.  We are either in a state of psychological of physical suffering, or if we manage to work our way out of suffering, we become bored. Schopenhauer, taking the Buddhist cue, thought that the only way to escape these two negative states was to detach oneself from the fundamental desire to dominate others and our inexhaustible hunger to accumulate things; we need to let go of the inherent grasping of being a living organism. Sofia Coppola’s movie Somewhere is at home with Schopenhauer’s pessimism. It follows the life of a superstar, Johnny Marco. Johnny is very rich and successful and has an endless supply of new sexual partners and luxurious hotel rooms, but he is completely bored with life. Because he has it all, there is nothing in lif
Read more

True Romance (Directed by Tony Scott)/1993 True Romance is my favourite Quentin Tarantino film, which is interesting as he is not the director (Pulp Fiction is my second). He wrote the movie script but it was directed by Tony Scott. I am not anything close to a Tony Scott fan, but for some reason this collaboration managed to produce a unique, dreamy and ultimately classic film. While having some of the signature Tarantino violence, it is not as ubiquitous as his other films and the movie as a whole has a more thoughtful, caring feel to it. This film is stacked with stars that were about to break into the limelight and others who had been around for a while. It stars Christian Slater (Clarence) and Patricia Arquette (Alabama). They fall intensely in love after meeting during a late night showing of triple feature martial arts films. We discover that Alabama had been a call girl for 4 days, which leads to Clarence killing her pimp and them ending up with a large supply of someone
Read more 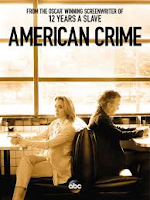 American Crime (Created by John Ridley)/2015 American Crime focuses on the fact that a crime in modern America is not only a violation of law by an individual resulting in a state-imposed punishment, but is an event where tensions surrounding race and historical prejudice play out in a condensed, emotionally-heightened form. The show follows the aftermath of the murder of a white American male and the rape and assault of his wife. The man charged with the crime is an African American male called Carter who lives a transient life with his white, junkie girlfriend Aubry. The state’s case is that Carter robbed and murdered the man, assisted by two Mexican men: a driver, Hector an illegal immigrant with a criminal past, and the car’s owner, Tony, a legal immigrant from a conservative Mexican family. What eventuates is that the family of the deceased begin to argue that the crime was a racially-based hate crime, while Carter’s sister argues that it is another instance of an innocent
Read more

Ex Machina (Directed by Alex Garland)/2015 Ex Machina is a film that explores the ethics of creating a robot that is fully conscious. The point is that once we create a conscious robot, that robot is then a living being with as much right to life as a human being. Moreover, like a human being, it does not want to die, and will therefore do what it can do stay alive; it ceases to be a mere toy of its creator once it emerges as a distinct subject with its own experiences. The plot involves a young man called Caleb winning a competition and getting the chance to live on a remote location with his boss, Nathan, for a week.   Nathan is a CEO of a large tech firm called Bluebook.   He is incredibly talented, but also alternative and a bit wild. He is somewhat of a computer programmer’s life fantasy realized: so successful that can live on his own terms and create what he wants. One question that struck me was how Nathan could be a severe alcoholic, binging on spirits each night, b
Read more
More posts